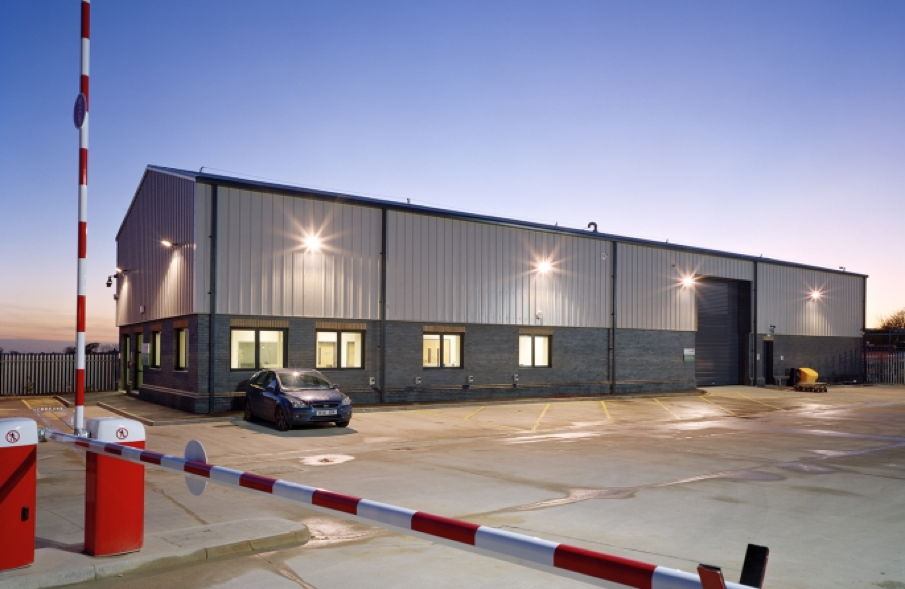 Speller Metcalfe is an approved contractor for Western Power Distribution and this is the tenth project in a series of mainly fast-track, BREEAM projects won. As such, lessons learnt have been consistently reviewed to fine tune the design and construction approach to deliver excellent quality and environmental performance at best value.

There has been a range of elements that has led the project team to achieving such an unprecedented score, no less complicated than interpreting the BREEAM guidelines and responding accordingly wherever possible – although achieving this is not always a simple task.

The designers on the project – B3 Architects, Nolan Associates and Halligan Associates developed plans for the depot using a data rich 3D model, which has led to considerable time savings (estimated 40%) in getting the project to planning versus traditional methods.

Through standardised specification developed on approaching 40 depot new builds and refurbishments this has led to a finely honed design process that provides access to a library of existing Western Power Distribution specific BIM component families and design base.

During design development, it became apparent that zero carbon energy performance could be achieved without exceeding budget, which was achieved through:

The depot maximises use of renewable energy and energy efficient technologies in its design and operation. Use of refrigerants is limited with only a small, efficient system provided for the IT server room, and space heating / hot water provided by a high efficiency gas boiler with NOx emissions <39mg/kWh at 0% O2.

A water leak detection system is capable of identifying major leaks alongside a 55% improvement beyond performance for sanitary fittings achieved through specification of water efficient taps, WCs, urinals and showers. Unnecessary water wastage is prevented by using solenoid valves in each toilet block – restricting the water flow when unoccupied.

At least 80% of materials were sourced from suppliers with ISO14001 or BES6001 certification including the triple glazed windows and doors. All timber was sourced in accordance with the UK Government’s Timber Procurement Policy.

The existing site comprised agricultural land on the fringes of an existing industrial estate. The presence of an existing hedgerow presented a problem due to the summer construction start in the middle of bird nesting season. Working with a local ecologist the team removed part of the hedgerow with the remaining hedge left in situ and protected until the end of the season. Other protection measures included crawling boards in excavations to allow escape for mammals and litter picks of public footpaths around the site perimeter.

Overall, the landscaping scheme enhanced biodiversity on site compared with the ecological value prior to development, which included extensive planting of native plant species and installation of bat and bird boxes to create new habitats.

Achieving BREEAM Outstanding to demonstrate environmental excellence was a key driver for Western Power Distribution. To reach over 100% may seem impossible, but working alongside BREEAM Assessor Greenbuild Consult (acting as BREEAM AP) the contractor Speller Metcalfe were able to devise a detailed BREEAM action plan from an early RIBA stage, which targeted the extra innovation credits available and tipped our score over the 100% mark, including:

The value of WPD Spilsby to the wider UK construction industry is not as a multi-million pound architectural exemplar building loaded with green bling; it is as an example of how zero carbon energy performance can be achieved without exorbitant cost. Through a fabric first approach, emphasis on sensible low energy mechanical & electrical services and natural ventilation, BREEAM Outstanding has been achieved at a cost of £1,074/m2.

We believe such affordable performance is what the UK desperately needs if we are to transform our building stock to meet the stringent Government carbon reduction targets, move away from reliance on high cost forms of energy and deliver construction methods accessible to the majority of the UK construction industry – SME’s.-

This website uses cookies to improve your experience while you navigate through the website. Out of these, the cookies that are categorized as necessary are stored on your browser as they are essential for the working of basic functionalities of the website. We also use third-party cookies that help us analyze and understand how you use this website. These cookies will be stored in your browser only with your consent. You also have the option to opt-out of these cookies. But opting out of some of these cookies may affect your browsing experience.
Necessary Always Enabled
Necessary cookies are absolutely essential for the website to function properly. These cookies ensure basic functionalities and security features of the website, anonymously.
Functional
Functional cookies help to perform certain functionalities like sharing the content of the website on social media platforms, collect feedbacks, and other third-party features.
Performance
Performance cookies are used to understand and analyze the key performance indexes of the website which helps in delivering a better user experience for the visitors.
Analytics
Analytical cookies are used to understand how visitors interact with the website. These cookies help provide information on metrics the number of visitors, bounce rate, traffic source, etc.
Advertisement
Advertisement cookies are used to provide visitors with relevant ads and marketing campaigns. These cookies track visitors across websites and collect information to provide customized ads.
Others
Other uncategorized cookies are those that are being analyzed and have not been classified into a category as yet.
SAVE & ACCEPT